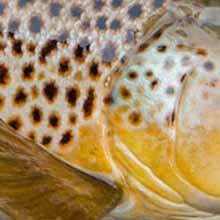 Brown Trout (Salmo Trutta) are actually a salmonoid and closely related to the popular Atlantic salmon. Browns are native to Alpine regions in Europe and Asia. Salmo Trutta was first introduced to North American waters in 1883 when a nearly mythical package of eggs wrapped tightly in wet moss was shipped to the United States from Germany. In 1884 a similarly wetted, iced, and fated parcel containing another genetic strain of brown trout was shipped from Scotland to Canada.

By 1896 these Scottish or “Loch Leven” brown trout had been successfully transported (again) across the North American continent and planted in California’s Sierra region near Wawona. Since roots of these first journeys, stockings, and introductions were planted, Brown Trout (Salmo Trutta) have thrived and the species can now be found throughout the lakes and rivers of the United States and Canada.

Owing to the Brown Trout’s (Salmo Trutta) incredible ability to thrive in an astonishingly wide range of conditions, sturdy populations of Brown Trout (Salmo Trutta) can be found throughout Europe, India, New Zealand, South America, and New Guinea in addition to waters across North America. Small and isolated groups of quite robust wild browns also remain at some high elevations in the European Alps.

Ole Salmo Trutta is considered the most wily and wary of the “trout class” primarily because of its particular feeding habits. In the early stages of life, brown trout tend to be a bit less shy and will more frequently and aggressively rise to surface-hatching insects. But as these fish age, they become much more characteristically wary and stick to a more painfully strategic, less reactionary, and mostly nocturnal feeding method.

On balance, Brown Trout (Salmo Trutta) enjoy finding and devouring insects, crustaceans, and smaller fish mostly at dusk and at night. In fact, many fly anglers fishing for rainbow trout have been quite surprised when they land not only the 8- or 9-inch rainbow they thought they hooked, but also the 22-inch Brown Trout (Salmo Trutta) that happened to be happily devouring the rainbow when it decided to take the fly! The most voracious feeding, however, happens beneath the cloak of night when nocturnal brown trout are begin to cruise the river banks for large terrestrial insects, smaller fish, stray mice, muskrats, squirrels, and even chipmunks.

Brown Trout grow to very large and can require casting large flies. For that reason we recommend a 9ft 6 weight. A floating fly line is best in most river situations while a sinking line comes in handy when fishing for browns in lakes.